There hasn’t been much going on lately. I had an intensive unit over winter term that took up much of my time. I’ve settled into second semester now, and I’ve had time to concentrate on spiritual things again. I’ve got my lararium up and running, now that I’ve finally found a lararium rite I can feasibly do and mod up for my syncretic practice. I’ve been meaning to post photos of it here/at the other blog all week, but never quite found inspiration/time. I’ve had some thoughts about many things, and several ideas I’ve written and scrapped in a bid to catch up with my PBP posts, which I have sorely ignored. I think I might take some time to re-evaluate my blogs, and maybe rejig them. I am at that point where I think I have too many, and don’t know what to do with them all. More on that at a later date.

Since I joined the Covenant of Hekate a couple of months ago, I’ve been doing new and full moon rites for Her, and it’s deepened our relationship. That’s the most festival-ish stuff I’ve been doing lately, apart from thinking about ancestral rites and such in a Roman context.

I don’t know why the Roman lararium appeals to me more than any other hearth. All I know is that it Just. Makes. Sense. so that’s what I’m using. Anyway. Have some shrine photos, for lack of other content. 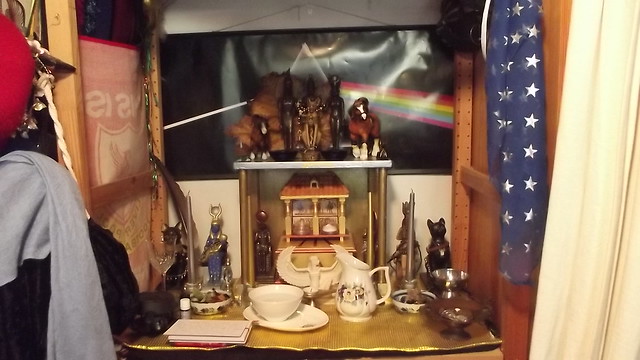 Used for daily offerings and for festivals.

I think I’ve tried to simplify this shrine about +elebenty times, always trying to make it less cluttered and more useful. I don’t know if I’ve quite achieved it yet, but it’ll do for now. It’s also a bit messy, since I took these a couple of days ago and I hadn’t tidied up my morning ritual yet.

Contains oil burner, oils, matches, cards to read ritual things off, libation bowl and plate, libation jug, and three bowls for coins/incense/gemstone/shiny things. The brown metal bowl at the bottom rlght is particularly a money spell, and contains local currency. The other bowls have foreign coins and other assorted things.

On top of the shrine are, well, draught horses. Shires, specifically, I think. They’re there because … #reasons. Still not sure if they’re totem animals/spirit animals/animals I just really like/associate with, IDK. But anyway. Horses, plus Bast-Mut, and Heru-sa, Wesir, and Aset. 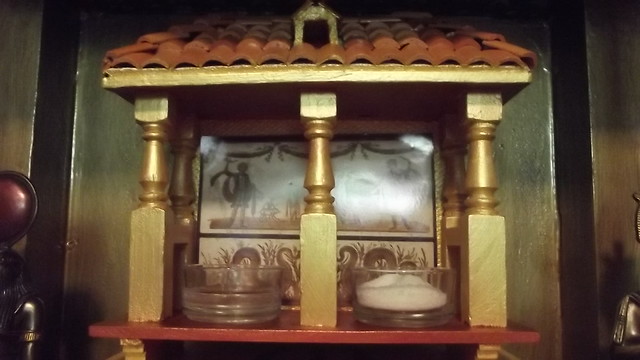 Made from a house/box/thing I found at an op-shop and painted.

Actual little lararium thing! I picked it up as some sort of … weird Colombian souvenir? IDK. But it was easy enough to strip it down to the bare bones of it and repaint it. Container to the left has water + a little salt, and the right contains salt. Printed out an old lararium image to use for the back. Using photo paper, hence, the shinyshiny glare. Oops.

I wasn’t initially looking for a tiny lararium, but it works well in several ways. It can hang on the wall, and it also leaves the larger shrine free to be used for other festival-things without compromising the lararium itself. So that’s pretty good for a random thing I picked up for $8. 😀 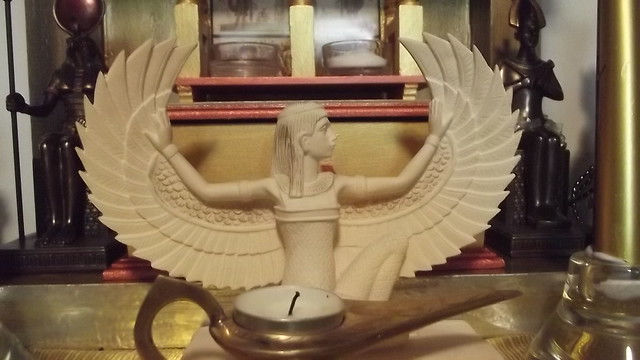 New Aset statue! 😀 She’s been sitting around in this New Age Pagan shop in the city for, well, it seems like months. I didn’t buy her at first, because she was quite expensive, but the fact that she was still there a couple of weeks ago as I’d decided I needed another Isis image told me this statue was meant for me. So there She is, looking resplendent and beautiful. 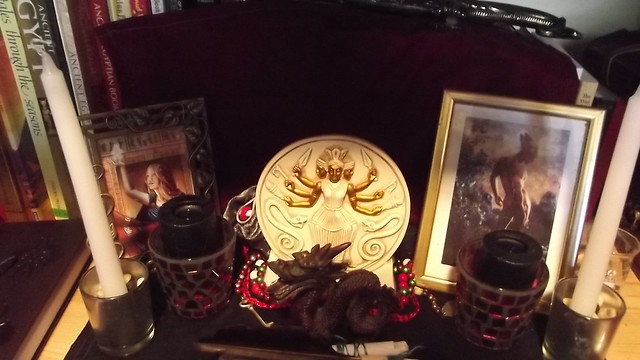 CoH shrine, dedicated to Hekate, with Hestia and Hermes.

This is my Hekate shrine, which, while occupying the same shelf as my Pagan books, is still useful. Apparently Hekate wanted a permanent shrine, whatever the size, so that’s what She’s got. It’s for my Covenant of Hekate rites, mostly.

Sorry for the weird angle on that, but it was clearer than the one I took straight-on.