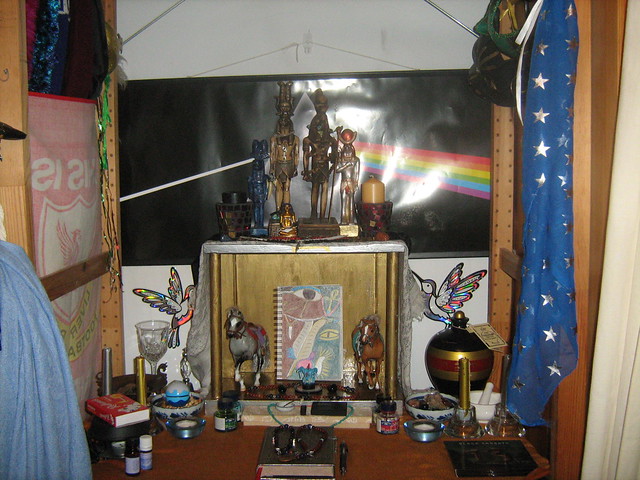 Newly-redone shrine. Icons are on top of the shrine because the big ones don’t fit. Apologies for the flash glare, too, but it’s late, and it’s the only way to take decent pictures with my shitty camera, since I can’t find the good one. I will do a more full proper shrine post at a later date so you can see where everything has ended up, but for now, admire the new set-up. And yes, that is a Feraligatr between the two horses. I regret nothing.

I think it takes a lot to go back to the beginning, particularly on any kind of spiritual path. Once you get so far along, you kind of feel like you know what you’re doing, and don’t feel like you need to teach yourself much. But, I don’t know, perhaps it’s the lot of a polytheist, but I feel like I’ve been collecting too much lately. My path and practice has become too full of thing, too full of festivals and gods, that I have come to feel burnt out. And I didn’t even recognise the fact that I was burnt out until today. But that’s what I am. I’m burnt out, and I need a rest.

It’s not just the subtle proddings by Woden (and possibly some ancestors) to look into Anglo-Saxon paganism (because apparently that might have been what the ancestors actually meant when they were talking about ‘The Old Ways’ they wanted me to bring back, rather than the Welsh polytheism I assumed they meant), or the calendars, and the SDF rituals I’ve been doing, but I don’t know. Somehow, it’s all felt like … too much. I’ve got to the point where I just need to stop, and evaluate just what is really important to my path, which gods I would be willing to spend time with on a regular basis, and what needs to be left behind. And also how to fit said ‘Old Saxon Ways’ into my path in any kind of meaningful way, if that’s what is being asked of me. (Though, I have just started Wyrdworking by Alaric Albertsson, and my reaction thus far has been, ‘Oh, so his definition of magic is pretty much heka, but in a different language. /finally understands the point of runes’. So. /ponders.)

It’s entirely possible this is related to my nearly 30th birthday at the end of the year, but that might just be a coincidence. Either way, I’ve decided to start again, right from the very beginning. I’ve stripped back all my shrines and redressed them. I’ve set Sobek and Heru-sa-Aset on my old festival shrine; They are the only gods on that shrine now. I’ve also kept Hekate’s shrine, because She has a tendency to help me when I get to these crossroads moments. The rest of my icons are on Sobek’s old shrine by my bed. It’s still a shrine, but it’s not one I will use (yet.)

I just feel like in the heady rush of calendars, gods, and festivals, that I’ve lost touch with what’s really important to me, and that’s working with Sobek and Heru-sa-Aset, and Hekate. And Aset/Isis, as needed. All the rest is negotiable.

I’m not going to use any set rituals or calendars. I’m not going to stick to any formulaic daily devotions. The only things I’m going to do now until whenever I feel a need to add more to my practice is some sort of daily prayers with Sobek and Heru-sa-Aset, and sitting with Hekate at the new moon to journal/write with her, and perhaps do some guided meditations. I also had something in mind for the full moon, but I can’t really remember what that is at the moment. I’m sure it’ll come to me eventually.

I feel a need to strip everything back and start again, as if I am new to these gods and building our relationships for the first time. I know it sounds kind of drastic, but I think my practice became so complex that I couldn’t see the woods for the trees. I was trying to do too many things at once, and I got burnt out. So we’re back to keeping it simple, just to see how that goes.

I’m not sure how long this will last. I don’t want to put any kind of time span on it, because then I’d feel like I had a deadline to work towards. I want to take the time to thoroughly go through all my spiritual baggage, and really figure out what is actually meaningful enough for me to keep in my practice. What festivals are really important, and how do I want to divide up my year, that sort of thing.

I also think I want to get back to short, simple rituals. It’s not that I don’t like long rituals, but my gods do they stress me out preparing for them. And I worry – a lot – when I am preparing for big rituals. And, I don’t know about you, but I’d rather do without that, thank you very much. I’d rather just keep things really simple, occasionally spontaneous, and able to be done without stressing myself out. Because, ultimately, I’m just not that much of a committed ritualist, and I’ve got to that point where I just don’t want to do that anymore. It’s nice and all, but it’s way too much stress. And this is coming from someone who has a lot of time on my hands right now. I would not have the time if I was working. So simplifying things now might not be such a bad idea.

I don’t know. I just keep thinking back to the first daily devotions I ever made when I was a baby Pagan. I lit incense, I recited prayers to Isis and … Djehuty? iirc, and just sat in Their presence for a few minutes. I did it before I went to school every day. And it was enough. It was no less powerful or effective as a formalised ritual. I wouldn’t have kept being Pagan if it hadn’t worked, I don’t think. I’d have given up. But it did work. And I think I’ve been chasing something like that ever since, in many more complicated ways than are perhaps necessary.

My life ought to reflect my devotion to my gods, I think, so to me, I need to listen to my instincts, to where my heart is leading me, and find what is really important to me. To find those things that bring me closer to my gods, just like they used to. Expect lots of blogging while I sort this shit out. It might take a while.

I’m not going to rip down anything I have up here, though, because this blog is meant to be a public resource for anyone who needs it. The calendars, the rituals, the myths, it’s all there for anyone who needs it, or seeks it. I’m just going to get back to basics for a while, and leave the calendar for later. Though I might make an exception for the Feast of Sobek next week. Because, well, it’s Sobek. 😉

Also, this was partly triggered by a thought I had when redoing the shrines for Beltane, and realising that I’d put Beltane (on Nov 5th, Bonfire Night) right in the middle of the Beautiful Feast of the Valley. Which. Well. One of them will have to move. I think it would spoil the energy to do Beltane in the middle of that. Which is why I want to revisit my calendar, because you don’t notice these things until you practice them, which is why I practice things in the first place, because you can’t know what they’re going to work until you do them.

Alsoalso, I really feel like there needs to be +elebebty more guides to Being Pagan In The Southern Hemisphere When 95% of Everything Available References Northern Hemisphere Things That Are Not Always Relevant. Because, y’know. Or at least more about Being Pagan In Australia In An Australian Kind Of Way Because We Are Not In Europe Anymore, Toto! /being too pedantic? I do feel kind of lost, though. I wish there was better Pagan community here, because if we met together in a more cohesive kind of way, we might have already hashed this shit out by now. I’m just having one of those moments where I read all these great books about paganism, and realise that, living in Australia, I can’t relate to any of it. And then I just has a sad. 😦