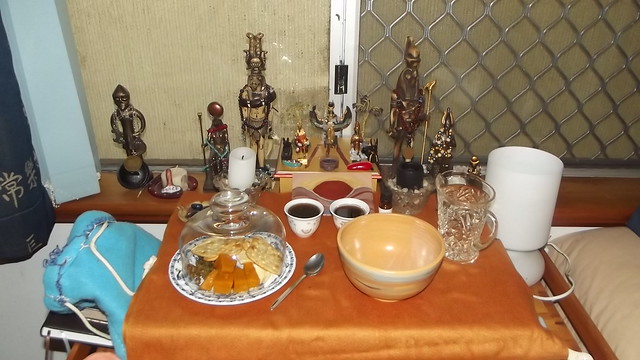 Autumn equinox shrine, set up by the window, with what I haven’t packed away in a box yet. Offerings are rum + Coke, water for libations, and a plate of stuff: pesto made from homegrown basil, roasted homegrown pumpkin, brie, crackers, and some sliced chicken.

It feels like too long since I last updated, but at least I’ve got a decent High Day to write about now. I’ll upload the ritual I used in a bit, since I finally settled on one I was happy with. It follows the SDF ritual format, but it’s more built around Kemetic gods and cosmology. And it took me about 20 minutes, which I think is pretty good for me. And knowing it’s a set ritual, and all I need to do is worry about offerings, and perhaps writing an appropriate hymn, it’s stress-free, pretty much, which is nice.

I was a bit worried about doing it today, since I drew Thorn this morning, suggesting I should make sure I’m properly prepared before going ahead with it. Which was fine, I felt that was a fair enough warning. But I made sure I was prepared and ready, and everything turned out fine. I lit some incense, actually, and had it on the sill near the open window on the right, so it could drift out into the air and not bother me so much. It was partly how I knew the whole thing had taken about 20 minutes, since the cones I use burn for 15 minutes, and I finished probably a few minutes after it finished. I did have to use sandalwood oil to anoint myself with, since I think I packed up my frankincense a couple of days ago. But that’s alright. It worked well enough, and I do like sandalwood.

The reason most of my things are packed away are because I’m in the middle of renovating my bedroom. We’re going to rip the carpet up and put bamboo flooring down, repaint the walls and ceiling, and I’m getting some new furniture put in. The shrines are going to be completely redone, and moved to the north wall (the wall to the left of the window). I bought a nice table I’m going to stain up to use for the main shrine, and once I start on that, I’ll definitely be posting pictures of how that’s going.

All this packing also meant that all I had to take the omen with were my runes, but to be honest, I could use the practice in learning to read them for divination. I’ve been doing single rune draws for the past week or so, just to get used to them, and begin to familiarise myself with the meanings, and what I get off them. I think it’s proved quite fruitful so far, and I didn’t think I’d ever take to runes this easily, but it feels quite natural to me. I’m quite pleased about that. Thanks, Woden, you awesome fellow you.

Speaking of Woden, He’s been turning up during my Hekate work too. He was there last night, standing at the gate with Hekate, as the warrior poet, and He stared me down again like the last time I met Him in meditation with Hekate. Thunor wasn’t there, though, not this time, but Woden certainly was. I didn’t get the sense He dislikes me or disapproves, but I think He’s just the gruff silent type with me. He stood there watching me make reed pens and cut strips of reed to make papyrus sheets. I could see He had a feather quill in His cap, though, and a roll of parchment hanging from His belt, in amongst all the armour and the axe at His side.

…I will, at some point, do up a big proper post about the Pillars of the Naos devotional work I’ve been doing for Hekate this month, and when I do, some of this will make more sense, but yes. Woden and Hekate and Artemis and all kinds of other things. Epic fun times, oh yes.

Anyway. Hope you’re having excellent equinoxes. I’m pleased I can light candles again in shrine, because the dark time of the year has started now. We’re working towwards the Mysteries of Wesir and Yule, and the cold of winter. I like this time of year. I like the cool change in the air once summer finally fucks off. There was a storm this morning, too, and some rain. The thunder woke me up. Felt that was a great start to the day. Things are only going to get cooler from here, and that’s great. I love that. Plus, it’s almost time for the Mysteries of Wesir, and omg I love that festival so much. I shifted it to begin on May 1 and run about a week, just to tie in with the rest of the High Days. Which, incidentally, I did eventually settle on a set of eight that felt right to me, balanced between the standard neopagan Eight, and the Kemetic holidays.

I want to use the Kemetic SDF rite on the solstices and equinoxes, as those are seasonal markers for me, and it gives me a chance to work with those energies, and to honour Sobek and Heru-sa-Aset for major festivals on a regular basis. The other four will be marked with more traditional Kemetic rituals, because those are cool too, and I don’t want to leave those behind. I mean, part of this desire to find a set of eight I could work with was because I just couldn’t leave the Mysteries of Wesir out of it. I really do love that festival so very much, so it’s becoming my Samhain. (ILU Wesir. <3)

The Coronation of Heru festival at the other end of the year isn’t exactly at the right place for the Kemetic calendar, particularly as it’s technically the last day of the Mysteries, but I wanted a time to honour Heru as King. That, and I didn’t think Aset Luminous would fit there, nor could I settle on a Ra festival I liked enough to do in its place. I wanted a fire festival of some description to set at that Beltaine period to reflect that energy, and I don’t know. It just felt like the right pick, to honour Heru’s coronation after the spring equinox, much as I will honour Wesir’s coronation in the Duat after the autumn equinox.

And now that I think about it, I think I might incorporate Aset Luminous-type festivities into my Feast of Zep Tepi celebrations, along with renewing the year heka and such. I want it to reflect what I do at Wep Ronpet. Besides, I’d rather like ALL THE CANDLES in winter than in summer, so. It just feels more appropriate at that time of year.

And of course it is getting to that time of year when I don’t need my fan on so much, and the weather is getting cooler. Now that the days will continue to grow shorter, and the weather will get cooler, now’s the time to light candles, because there isn’t so much light around now. It’s the dark time of the year now, until the next equinox. Wesir’s time. My favourite time. He’ll get to break in the new shrine once it’s all done, since the Mysteries will be the next major festival once my room is done in the next few weeks. That’ll be nice. I’m looking forward to that now, and I’ve got time to organise my liturgies so I can write them in my ritual book ahead of time. /likes being organised.

4 comments on “A Blessed Equinox!”