..Sort of. The room is painted, but we’re still waiting for the floor to be put in. Don’t know when that’s happening. I slept in the TV room for a week while we got the room painted, but I’m back in my room now, paint-messed-up carpet and all because mum hates clutter and wanted her TV room back. Don’t know how long it’ll be until it’s done, but at least I can amuse myself by painting shelving. I still have lots to do there.

But at least you can get a sense of the shrine in its place now? I’ve still got everything in boxes, but there’s enough there for daily devotions, and for the Mysteries of Wesir. Observe: 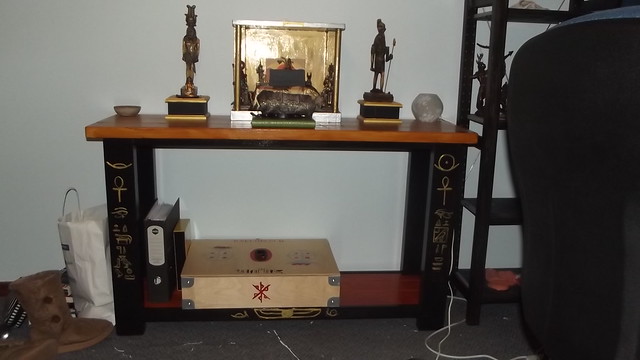 Note paint-messed-up carpet, and other general mess all over the place. The shelf to the right will have most of my Pagan books, once I have that all set up properly. But for now, it just has a couple of shrines, since I still need to get the wall shelves up. I plan to do a proper consecration and enshrining rite once everything’s done. Right now, it’s only half-done, and I don’t want to waste my time reconsecrating twice.

Anyway. Have some photos of the other shrines after the cut. I’ll do another post later on other assorted things that need a separate post. Like Artemis and other things.

This is a little space for Artemis and Hekate. Will explain more about Artemis in a later post, but for now, I’m working with Hekate at the new moon, and Artemis at the full moon. I’ve made Artemis some prayer beads at Her request, long enough to wear as a necklace in case I can’t be at shrine for devotions. We haven’t settled on what, exactly, these devotions will be yet, but at least I have the beads now. The other stuff there is self-explanatory, I think. 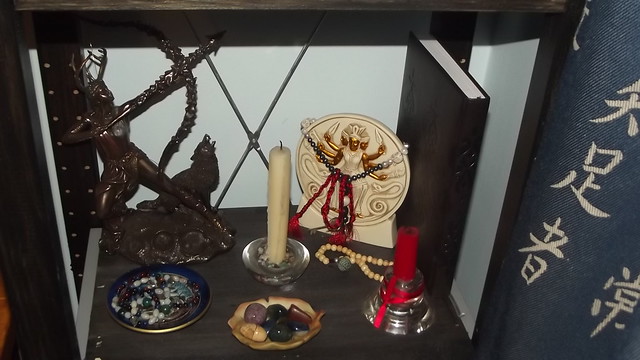 So I bought Hermes a nice jar for my coin collection. I asked Him to make sure my statue of Woden arrived safely back when I was waiting for that to arrive, and I offered/He requested my coin collection in recompense. So now it has a shiny jar. And now, of course, He pretty much has all the coins I own, except for the pennies I keep with the ancestors for their crossing. 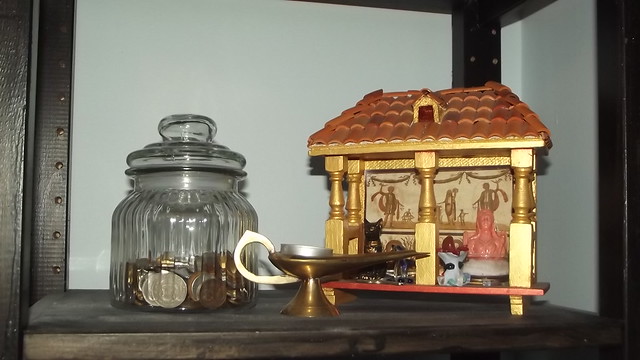 Woden always wanted this spot, tbh, but I had vertical blinds up that made using the windowsill impossible for a shrine space. But I decided I’m not going to put them back up, so Woden can have His space, just in front of His outside shrine, like He wanted. The black bird jar was originally a canopic jar I made in high school, in year 8. It was originally a penguin (:D?) and then got repainted ten years ago, and then hung around, waiting for me to figure out wtf to do with it. So now it’s black, with runes on the front, and it’s where I keep my rune stones in a bag, so I can draw from them. 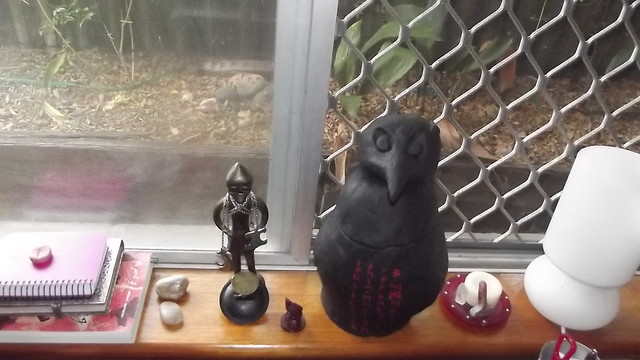 I think that’s all the new stuff, and other arrangements. I’ll leave this here and get on with the other post, because that will take a while to write. There’s lots to cover. But hey, progress! And I’m not sleeping on the floor! And my room is looking awesome! 😀