I’ve spent all day moving books and other things into my room omg. It’s all done. The floor’s done, the walls are done, the new light+fan is in, and now all I need to do is fit everything back in again. Bweee. ❤

There’s still a little out in the garage, and I still need cull some things, but at least I have a functioning room again. It’s so nice. I think it’ll take a few days to sort out where all the shrines are going, as well as all my other stuff. I have even sorted my Paganish books a little, though I might thin them out a bit. Might move all the generic fairytale/folklore books to the other shelves, and keep that one for proper Paganish things. Rae Beth’s Hedge Witch might be on the cull list, tbh, though, because it just didn’t agree with me, and I could use that space for another book I like much better. I think it has pencil marks in it, but otherwise, it’s in great condition. Has been to New Zealand and back in January 2012 or whenever it was I went to NZ. Do I keep the one book on astrology I bought in a supermarket for, like, $10, or ditch it because I never fucking do astrology. These are the questions that are plaguing my mind at the moment. Go me!

Anyway. I bring shrine pictures. 😀 I have the candles lit, and I found my frankincense cones, so I’ve got one burning atm. I have missed that smell, I really have. Myrrh just isn’t the same. (Well, yes, thank you, Captain Obvious.) I’ve got the Mysteries of Wesir shrine set up too. It’s quite pared back from previous years, but I think that’s also partly just getting used to using a new space, and figuring out what works. There aren’t any candles this year, because they’ve been stuck in boxes in my garage, but also because, well, it feels weird to, well, light up that space. Wesir’s all covered up in black, with Heru and Aset by His side, in His shrine box. I haven’t done any rituals for the Mysteries yet. I’ve been too busy fixing shrines and finding places for books and other assorted things. I want to do the Night Vigil at any rate, even if I just sit in shrine the rest of the week. But I hope I”ll have more of a mind for these things once this room is sorted out. I’ve hardly thought of anything else, and I want to get writing, and move on to other not-dealing-with-renovations things.

But enough babble. There will be moar under the cut with the photos, I daresay, so I might add the cut and get on with it. 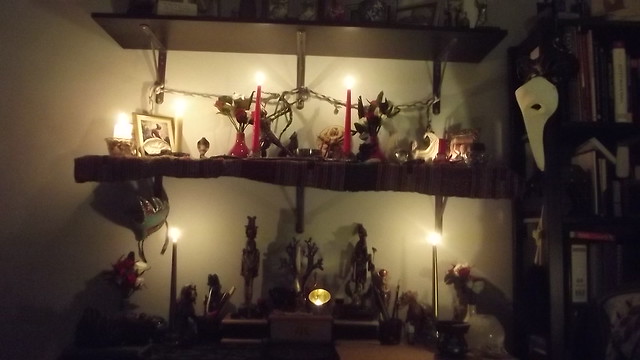 I probably ought to have taken separate photos of these two shrines, but ehh. /it’s late and I’m hungry so. But that’s the current set up. I had always intended to change it from the initial run of throwing stuff on there and arranging in in a semi-nice sort of way, because I hate cluttered shrines with no room to move, so I’ve put a few things away, and tried to give myself a small space to do libations and whatnot. I’ll have to take another photo of some of the close-up parts of it. I don’t know how well you can see the tree in that photo; it’s painted black merging into blue, with silver seeds in the roots, and gold stars in the sky, connected by red bloodlines. It’s next to the fire and well/cauldron, completing the druidry triad thing. My ickle statue of a scribe is sitting in front of the tree. There are also a couple of small stones painted by an indigenous artist to represent that connection with this land.

But like I said, I’ll do a better photo run with better light and more close-ups later. Then you’ll get a better sense of how it all fits together.

The shelf above is for Hekate and Artemis, and mostly Theoi, if you want to count Grecian Isis as one of them. I’ve got Artemis and Hekate in the centre, with Hermes on the left edge, and Hestia on the right edge. Isis sits between Hekate and Hestia. I might one day replace that Egyptian Aset statue with a Greek Isis, once I can afford one. It’d look a little better. And She’s only there because of Isis-Hekate. To be honest, this shelf is pretty much all the gods associated with Hekate. I know I need some form of image or representation of Apollo, too, to go next to Artemis. That was made clear to me as I was finishing the shrine. That He’s missing, and ought to be there.

Also, Artemis’ statue looks so large compared to the small one I have for Hekate. It’s bothering my symmetrical aesthetic. But I can’t afford new statues at the moment, nor do I have room for them, so. It’ll just have to be like that for the time being.

(Also, it’s really nice to be able to light candles again. I cannot tell you how much I have missed it. I wanted to try this thing, where I only light candles between autumn and spring equinox, when the light is lessened, and internalised; the summer doesn’t need it, because the light is dominant. And, man, I did miss it. But at least I have candles now, so I can light them every day now, and invite that warmth in. Sobek has a silver candle, and Heru has a gold one. I also bought new red candles for the Rite of Her Sacred Fires for Hekate this month. My other red candle isn’t lighting anymore, so I’ll have to replace it now to make it balance properly.)

(I also need to paint that Scaramouch mask for Djehuty. I’ve been hanging on to it for years, painted it white and everything, but never went through with it. Well, I have some things to paint now, so I might as well do that while I”m at it.) 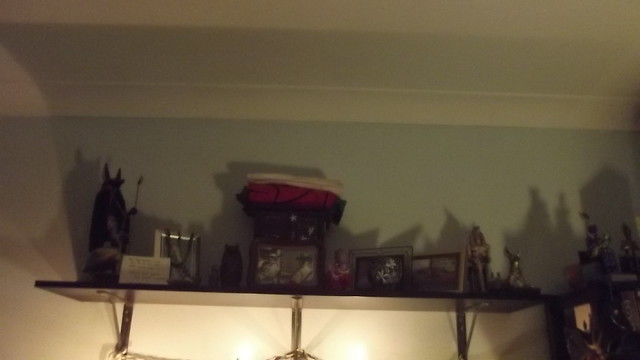 I don’t think the angle’s very good on this one, but it’s the best I can do for the moment. I might still tinker with it, but at least it’s up there, so I can make libations properly on the 5th. I only have two things from my maternal grandparents; the Welsh flag was grandad’s, and the jewellery cabinet was nanna’s. There’s a photo of them in front of the cabinet. To the right are two photos of my poor dead cats, Tilly and Lady. Mary has a little spot to the left. I also still need a proper full set of canopic jars. GDI someone buy me a full set, rather than just one at a time. So irritating. And the sets I can find on the Intarwebs are very much Not Cheap. D: Maybe one day I’ll have them all. XD

At least I was able to dig out my jql statues. They used to answer quite specifically to either Yinepu or Wepwawet, but I think They’ve got back to a jql is a  jql, and it kind of changes. I do tend towards preferring Anubis/Yinepu for the one on the left, and Wepwawet for the silvery one on the right, but it’s not really set anymore. *sighs* Silly jqls. 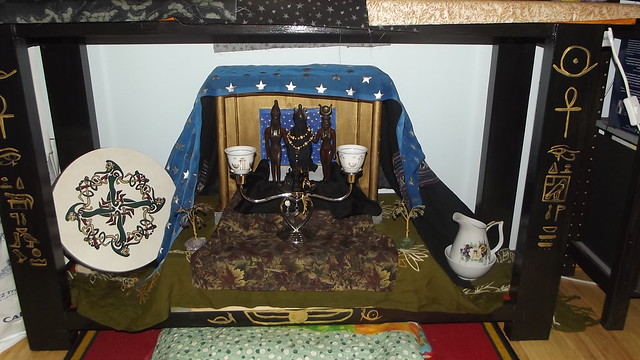 Festival shrine for the Mysteries of Wesir

I kind of had to take this one with flash so you could actually see what’s there. I was actually planning to use the candelabra for a centrepiece for Sobek and Heru’s shrine, but then I got other ideas, so now it’s down here. Pretend it’s a really bad rendering of Yinepu’s scale to weight the heart. IDK. I think it’s too high there to safely light candles, so that’s why there are two cups instead of candles. Mourning Aset sits between the two small jqls I have. Drum, shrine, starry black and green materials, libation bowl and jug, and two trees. It’s a pretty simple set up. I think simple works well for the moment. And yes, that’s Wesir’s box shrine as the coffin. I think it adds a nice focus, just having the one big icon there. The shrine cloths are the colours they are to tie into Samhain-ish themes as much as for Wesir as a dying god reflected in the dying land as winter descends.

Anyway. I’ve written a lot, and I think that’ll do for now. It’s getting late, and I should do devotions now while the candles are lit before they all burn out to nothing. Laterz.