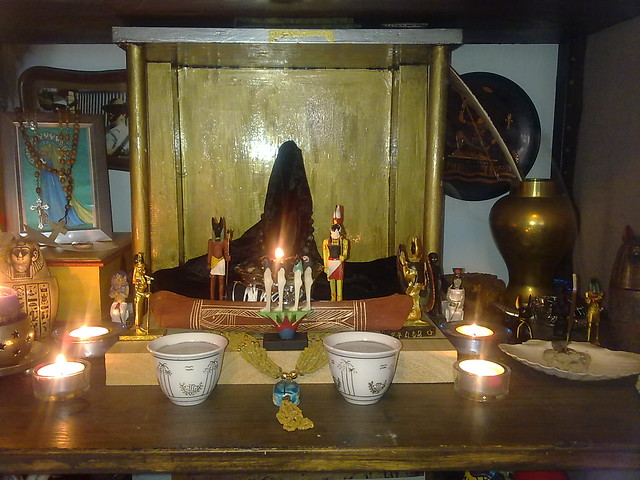 This year’s shrine set up for the Mysteries of Wesir. My seated figure of Wesir sits in the back shrine, covered and concealed. On the offering plate, my smaller figure of Wesir is wrapped and bound with amulets, and lies in a wooden boat. He is surrounded by Anubis, Heru-sa, Aset, Nebthet, and the four sons of Heru.

I’ve been in quite a reflective, introspective mood in the lead-up to this year’s Mysteries. I had wanted to post a bit more, but instead, I’m sitting here in thought, sitting in the silence. A lot of internal stuff is happening that I don’t really feel ready to talk about yet. Perhaps after Yule, idk. I’ve had the shrine prepared for nearly a month. The Equinox came and went with little fanfare, because the Mysteries were upon me now, and I felt they were more important. I do love the Mysteries. I love that quiet, gentle time that it ushers in. And spending time with Wesir is never wasted time.

I always feel like the time between now and the winter solstice in June is a time of cocooning and solitude. It’s a time for re-evaluation and preparation. And I do have a lot to prepare for. Hekate’s Rite of Her Sacred Fires takes place tomorrow, the day of the Night Vigil, and I’m still deciding how to arrange all that. I can’t stay up all night, because I need to be up early for work, but I still want to spend at least an hour in shrine with Wesir, reciting the Lamentations and offering libations.

Shrine set up for the Rite of Her Sacred Fires 2015. Crappy phone camera is crappy, but you get the idea. Also, statue of Hermes at last ftw. It is so much more beautiful in person, negl. I love it. ❤

I’m still fiddling around with Hekate’s shrine, as well. I currently have all the candles, but I haven’t decided on any particular offerings or what else I want to do for the rite. I may do it during the day, for once, just so I can give it the time it really requires, and not rush it. I want to spend time in meditation with Her, I know that much. What else happens, I don’t really know. I might try to time it for dusk, perhaps, just so the candles actually make an impact; it’s never quite as good lighting candles in the day time. Otherwise, I might close my curtains, and make the room dark that way. We’ll see. I might also grab a pomegranate off the tree, if I can find a ripe one, just for some decoration, or as an offering.

Also, yes, I have a statue of Hermes now. I fell in love with that particular statue over a year ago, but it was always too expensive. I kept looking at others that were cheaper, but they just never called to me the way this one did. If I was only going to have one statue of Hermes (and that’s all I have room for, so one it is), I’d rather get the one I wanted. I eventually checked out eBay a couple of months ago, just to see if I could get it cheaper. I wasn’t hopeful, but eventually, I did find someone willing to ship it to me for a reasonable price that I could actually afford, so I bought it. And now it is mine. He really is gorgeous. Worth every penny I spent on Him.

Hermes has been pretty prominent in my life for most of the year, which has been interesting. He’s quite different to Djehuty. Less of the masculine androgyny, and the formality. Hermes is a lot more companionable, which He’s sort of known for anyway. They’re both tricksters in their own way, but I think it’s much more apparent with Hermes. Like, I knew beforehand, and so I’m sort of more prepared for that. Djehuty isn’t quite as explicit about it, least not in my experience. But then I think Djehuty is always playing the long game, and never shows his hand, so you never quite know what’s happened until the dust settles. Hermes is much more playful.

I actually first met Him in connection with Hekate. There was a new moon guided meditation (iirc) in which you meet Hermes, and He takes you underground to meet Hekate, and that’s when I first met Him. But it wasn’t until this year that He really began to turn up and make His presence felt. I still have a story to finish for Him, but I’m slowly working on that, now that I’m getting a bit more settled into my routine at the shop. It’s slowly getting done, and I’ll post it here when it’s done and ready, just so you can all share in the beast that Hermes unleashed.

Anyway, I have a billion other things to do that I’m behind on, least of all is some of those Pagan Experience posts to finish and edit. I’ve got about three ready to go, but I’ll post them over the next day or so, just so I don’t flood your inboxes with all the posts. There’s one on coming out as a Pagan, one on gnosis and UPG, and another on the gods. I’m trying not to make them too long and rambly, and trying to keep them on topic, but tbh, I am sort of ready to let them be whatever it is they want to be, rather than try to strictly stay on topic. Anyway. I’ll be over here, writing and editing, and listening to all the +elebenty albums I am behind on.