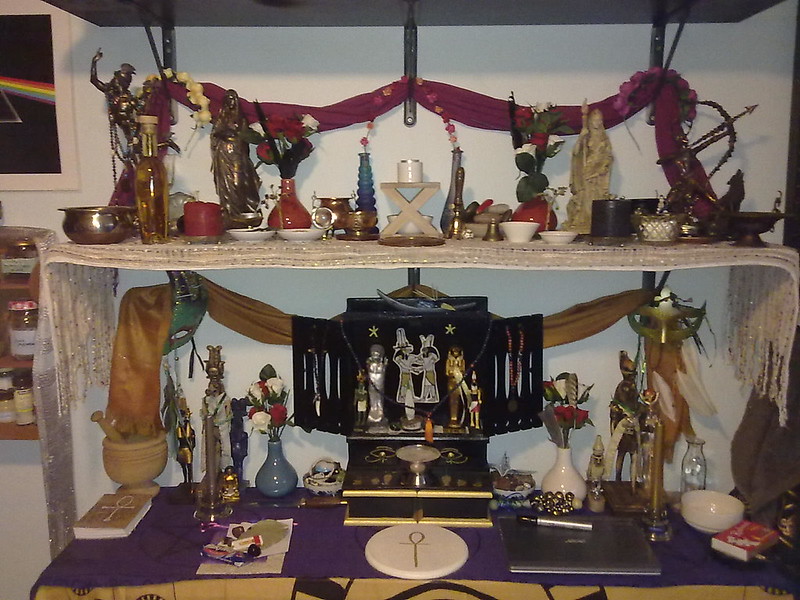 Tonight’s High Day shrine, complete with most of the offerings for the ritual, including the things on the lower shrine. The only things missing are the oil for Artemis, and the juice for the blessing cup, which I’ll put out just before the ritual begins.

I have nfi why it took me this long to connect this time of year with National Novel Writing Month (NaNoWriMo), which I have done every year since 2006. But I perhaps wasn’t looking for the right connections. But that connection has totally reshaped the way I see this time of year, and that helped me get over my ‘omg I hate Beltane’ stuff and focus on what’s actually important to me. Because I really wasn’t looking forward to having to deal with that energy. But now I have NaNo! And I can totally build my High Day ritual traditions around NaNo because wynaut? I do it every year, even though I sometimes don’t have an idea, and don’t always win. I do it anyway. I might do a separate post later on the story I’m working on, since it’s about Hermes, amongst other things.

So tonight’s ritual will be for Hermes, and I’ll get Him to bless my writing tools and whatnot. I’ve been drafting sigils for the past few days, and finalising the hymns. My nails are even painted black because idek. The laptop on the right is a tiny Acer Aspire Switch 10, which I bought earlier in the week for different reasons, and it is adorbs, and it will be scribbled on with sigils (on both the tablet bit and the keyboard, since they separate) because it belongs to Hermes because of course it does. The stuff on the right near Sobek’s stuff is for a spell bag/charm bag/idek. The USB, although old, has a copy of the novel I’ll be working on. Because I’m doing a WIP, obvs. There are other things in there, of course, and I might detail those later in the post-ritual write-up.

Hermes has also requested a soundtrack for this particular ritual. I have never done rituals to music before, but He was all, ‘if you’re going to throw me a party, you’d better have some music’, so. I have basically built my usual ritual around the music He requested, and it’s going to take two hours, but there you go. There’s also a track He wants me to sing for Him, so that will go about as well as I can sing, I expect. I can sing, but I’ve never done it during ritual before, and it’s one of those songs that will probably make me cry halfway through because I know those lyrics are perfect for this ritual, so. Thanks, Hermes. My nails are painted black in preparation. XD

I also spent this afternoon looking for garlands, because Hermes insisted I have garlands of flowers to wear in my hair. You can see them in the photo above. I found a pair of headbands with roses on them, one yellow, and one purple, and they will do nicely. I’ll be wearing the yellow tonight. Yes, they are fake flowers, but I have neither the resources, nor the skills, nor the inclination, to craft mine from fresh flowers all the time. So fake it is. Look, I am just terrible at caring for cut flowers. The less I have to do that, the better. Also, it is depressing bringing living things in to watch them die. /unpopular opinion.

At least I feel a little more prepared for this one than the last one. I have everything I need, and all I need to do is get the perishable offerings I need, do my khernips cleansing, and see how it all goes. Everything else is prepared. I’m still deciding on whether I’ll use the draft script I printed out (which I changed very little) or write it out in my ritual book. But I’ll see how lazy I get. I may just write it out later and use the script for now, and all the scribbled on song notes and hope I don’t get lost. XD

Anyway. I’ll be posting a full write-up of the ritual afterwards on my DP journal, so keep an eye on that if you’re interested in seeing how I go doing a ritual to music for the first time omg. The full ritual script, with song notes, will be posted over there as well, so you can all see what I actually did, and to which songs.

2 comments on “High Days and NaNoWriMo”