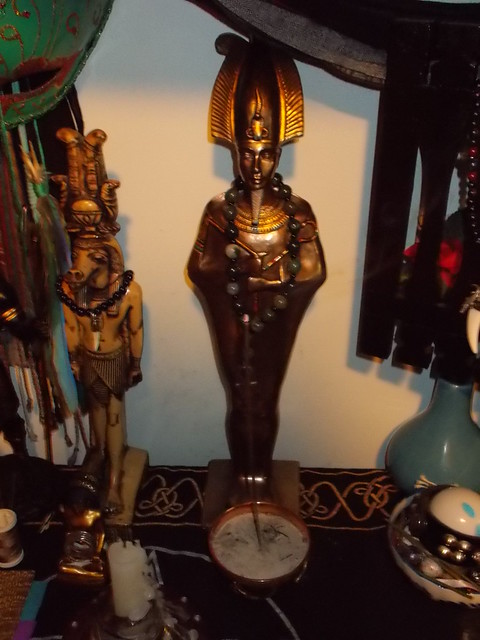 Hi Wesir! Also, sorry about the shadow. The lighting in my room is terrible most of the time. I was using the flash and everything, gdi.

I swear I only did this a week ago. Why am I rearranging my shrines again why. Wesir was not meant to go there. He was going to go on my windowsill, where there was a nice spot just the right size. I was going to gaze at His serene face as I worked to finish the Contendings retelling, and it was going to be grand. I mean, I’ve been looking for a mummiform statue like that for a while now, for easier Mysteries of Wesir shrouding amongst other things, but never found one I liked enough at a time when I had actual money to buy one. So when I looked a few weeks back, I saw this one, and bookmarked it for future purchasing. And then they went and cut 30% off the price, and since he was coming from the other side of the country, I calculated that the price I paid for him was about the equivalent of a similar 6in Wesir from the US. So. I now have a big Wesir. And he is beautiful. He has a very calm energy about him.

There is a reason He’s there, of course, not that I knew that when I bought it. I’ve started timing my Isis devotions for after my shower, as this seems to be a more consistent time signal for me to do them. And so as I was meditating and hanging out with Isis a couple of days ago, Wesir turned up, and He was all, you should come see me at my place, I have some things to teach you, and He tried to show me where that place was but all I remember is an obelisk in a wheat field, and that is how Wesir is now on my shrine. Because that is what the shrine is for.

I might’ve done a bit of a welcome ritual for Him in the middle of Isis’ devotions, because idk this shrine is now for four gods wtf. Four gods that, logically, make sense to be on the same shrine, given the Shedet thing, but still. Four gods. I mean. Sure? Okay? It’ll be interesting working with Wesir, though. I’ve never really had much of a relationship with Him before. I’m curious about where this is going to go.

Also, I am sure I am going to spend a LOT of time pondering Sobek-Heru, who is, of course, now placed next to His Father Wesir, and I can see the delving deeper into the Shedet mythos is going to be somewhat inevitable. I foresee a lot of head-hurting. I mean, it wasn’t like I was never going to do it, but apparently the gods decided it was now, so. Yay? XD 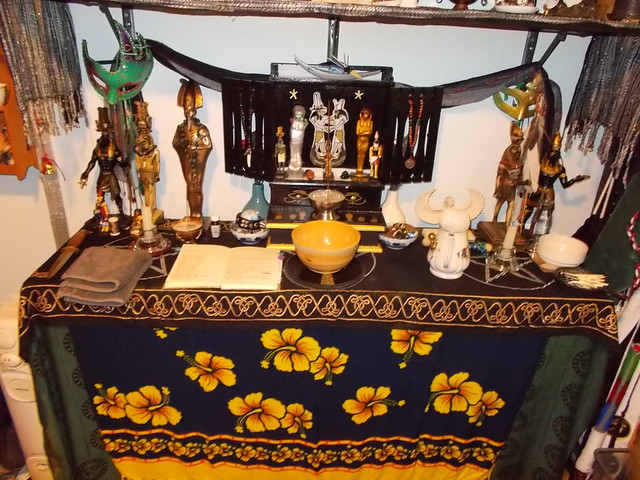 And of course, the shrine is now split in a very interesting way. If anything, it’s more dualistic and Sky/Earth split than it was before. Sobek here is becoming an underworld god, or at least, a god who is liminal enough to transgress those spaces. He protects Wesir, and brings Him safely through the Duat. And on the Eastern horizon, because my shrine sits on the north wall, there’s Heru and Isis to welcome them, and carry Ra through the sky. I feel like that cycle is even more emphasised now than it was before. It was always there, of course. It’s in my devotions. Sobek is the night boat, and Heru is the day boat. But somehow, Wesir and Isis’ presence there solidifies it more than I was anticipating.

I’m sure once I get the Isis to match Wesir, when I can spare the money for it, the balance will change again. I’ve been thinking about statuary a lot, because I was trying to figure out how to even have Isis integrated into this shrine. I don’t have a huge range of statuary to choose from, and I don’t know if anyone else can relate, but none of them were bought with a shrine in mine. I mean, yes, they sort of were, in their own way, but not for this shrine. It’s not built for what I currently have. The energy feels… sort of not quite right. But I’m letting it sit, for now. I’ve made do with much less than this. Let’s just wait and see where this goes.

It also occurred to me, as I’ve been getting back into devotions for Isis again, that I’ve never had any sort of journal dedicated solely to Her. In sixteen years, it never happened. So I had to start one, since I don’t want to keep throwing them into Hekate’s book. If I’m going to meditate a few times a week during our devotions, I’ll need somewhere to keep a record of them. I think I’ll throw Wesir’s stuff in there too, since He came with Isis, and I don’t have room to keep another journal, so. It’s safe to say I am much better at magical record-keeping than I was when I first started. So that’s something.

Anyway, this was meant to just be a short post about omg Wesir, and it’s got a bit longer than that, so. I’ll leave this here and ponder what to write next. Because writing. And it seems I am in a bit of a blogging phase, so. *throws all my ideas at you*