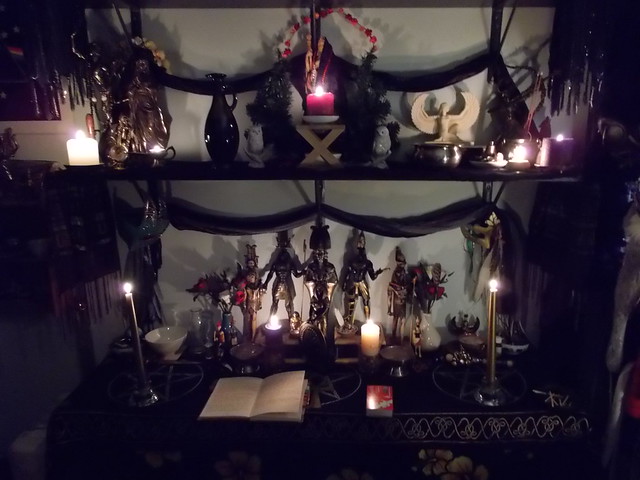 With the deipnon, comes the noumenia. It was quite a peaceful rite. I used a new liturgy I’d adapted from a couple of other noumenia rites I’d found online, and gave it more of an ADF structure, and I think it worked well. I offered honey liqueur, which I poured across the back gate after the rite. I am also drinking half a shot of the same in some ginger beer, and it is great.

I did try to do some meditation, but my brain was too fuzzy to focus on it, and I never dipped below into the landscape. I saw flashes of it, but I never went anywhere with it. But it’s okay. It happens every now and then.

Also, you can see the new Shedety shrine coming together in that photo above. I’m not entirely 100% settled on it, but it’s probably closer to done than not. Part of the fun of working with that space is that it also functions as a working altar for the druidic shrine above, and so it can’t just be a shrine. I’ve been trying to focus on everything that’s on there, and trying to decide if it should be there, or if it’s just taking up space. So it’s been stripped back a bit, and I’m trying to get as much space out of it as I can, because I like having space to work on.

I’ve also been putting the Sobek book together, gathering all the information and writings I already have, and it comes to about 77 pages or something idk. I’m not editing yet, I’m just gathering, and seeing what I’ve already got, and what I still need to get. Some things may get culled, of course, but we’ll see how it all comes together.

Anyway, in case anyone’s interested, I’ll post my nounenia liturgy below. Feel free to nick it for your own purposes, if you’re looking for something like this. I’ll add in the sources for this when I post it under the House of Life pages, but I know one was the Neokoroi (sp?) rite, and another was a blog somewhere idk. But I will chase those up, and add them in later, because I think I kept some of the words, and wrote in some of my own, and I care too much about citing my sources.

ADF Hellenic Noumenia Rite
To be performed on the night of the new moon, in honour of the Theoi

Preparation:
Ritual bathing is encouraged. Dress in clean robes or clothes. Garland your hair. Gather the offerings to the Theoi. This is primarily a libation rite, so bring enough libations for all the offerings required, as well as any other offerings you wish to make.

The Rite:
1. A bell is rung twelve times to begin. (This is for each of the 12 Olympians.)

2. Hestia’s candle is lit first, and a libation is given. The following is said:
To you, Hestia, given honour first and last.
I light this fire in your honour as the new moon appears,
May this house shine bright with your blessings

3. All other candles are lit then from Hestia’s flame, along with the incense.

4. Next, the statement of purpose and invocation is proclaimed:
Gods of the noumenia, I call to you now,
O Athanatoi,
Shining Gods of the starry Heavens,
Mighty Gods of the broad Earth,
Ceaseless Gods of the World Beneath,
Xairete, Theoi.

Hear me, and come, Hestia’s flame beckons you near,
Come to the hearth, Deathless Ones,
Bless me with Your presence as I give honour to You this night.

5. Libations and offerings are made to the gods of the noumenia, in turn, followed by other gods and spirits:
Receive these libations, gracious gods, and rejoice, for your joy is mine this night.

To you, Hestia, flame of the hearth, keeper of the sacred fires, guardian of the home, for you I pour out this first portion, as yours is the first and the last.
**Libation**
Be well disposed.

For the gods of the Noumenia, I pour out the next shares, for it is under your auspices that I come to You tonight.

To you, Zeus Ktesios, Lord of the House, provider and protector, mighty thunderer who rules in heaven,
**Libation**
Be well disposed.

To you, Hermes Ktesios, messenger, boundary-rider, protector and friend of mortals, swift guardian of the house,
**Libation**
Be well disposed.

To you, Agathos Daimon, winged serpent, god of good fortune, beloved of Tyche, kindly one.
**Libation**
Be well disposed.

And for all the blessed gods, resplendent, beautiful, immortal, and to the great heroes, ancestors, and spirits of this place, I pour now to you an equal measure.

To you, Artemis, be well disposed.

To you, Isis, be well disposed.

To you, Gaia, be well disposed,

To you, Theoi, known and unknown, be well disposed.

To you, Heroes and Ancestors, be well disposed.

To you, Daemons and spirits of the land, be well disposed.

6. Make any further offerings to the gods, if desired. Meditation or other time spent with the gods can also be taken. An omen many be taken, if desired.

7. Offer up your praise as you say the following:
To you, gods of the Noumenia, I have given libations and praise.
Come, gods of the household, protect us this month from all that seeks to harm us.
Bring us joy and prosperity, love and peace,
May the boundaries be safe and steadfast,
May there always be enough food to eat and drink to sustain us,
May we have warmth and shelter, and all good and pleasant things,
Gods of the Noumenia,
Accept my offerings, and return all good things to me.
Keep me safe, mighty gods.

8. Make final libation to the gods, and to Hestia.
To you, beloved Theoi, I offer my thanks.
**libation**
Be well disposed.

To you, Hestia, given honour first and last, I offer my thanks,
**libation**
Be well disposed.

9. The bell is rung twelve times to finish. Then the candles are extinguished, with Hestia’s done last.

4 comments on “And now, the Noumenia”