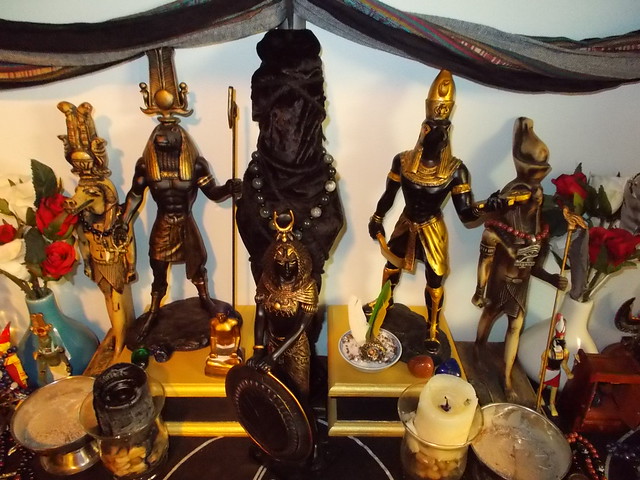 The Holy Family, and Wesir shrouded. I may switch all the (not-black) candles out for black ones closer to May.

I realise decorating for the Mysteries so soon after the Equinox is probably a bit fast for some, but for me, it’s an important marker for the beginning of the dark time of the year, and the descent into winter. It’s a reminder of what’s to come, and that Wesir’s gone from us. I’ve shrouded my other seated Wesir statue, and hidden the small 3in one away. It’s part of the ritual preparation for this time of year, to hide Wesir’s images away, and know what’s coming. The shrine feels slightly more precarious now, and while there will be things added closer to the beginning of the Mysteries, for now, Wesir is gone.

Arguably, it’s probably just a coincidence that I have felt the need to do this on Maundy Thursday, in the lead-up to Easter. But it does feel like eerie timing. It is the season of dying gods, at least down here in the southern hemisphere. It isn’t quite the season of the land dying back, though; summer is the season of dying, and drying, and cutting back. Autumn is almost a breath of relief, that things are cooling down, and that what has survived the heat will keep going.

The full moon rite for Isis last night was also good, and deserves its own write-up, though I do feel like I need to make a specific full moon rite for Her, rather than keep using the general libation rite like I am now. It works okay, but it doesn’t have the right feel, like it’s about the full moon. So I’ll take some time to think about that. Meditations were good. We had a long chat about things, like heka, and bodies, and shapeshifting, though that makes it sound far more interesting than it really was. Which, it was interesting, but long chats about magic with gods are quite different than you might imagine. But I might make a post on all that later, if I remember, because that’s not what this post is about.

Perhaps it is because it is close to Easter, and I’m in the process now of beginning to prepare for the Mysteries, that these things are on my mind. You mark the Mysteries even once, and it gets under your skin. I keep coming back. I keep shrouding the images. I keep making the libations. I keep the holy days until Wesir returns. Return being somewhat relative, since Wesir doesn’t come back to life. Here we are, in the midst of a spring Easter festival, and I’m preparing for Wesir’s death. Perhaps it’s something about this time of year that brings this sort of energy to the fore.

It’s reminding me of some of the more powerful Christian festival experiences I remember from my childhood. I was never much of a Christian, and never particularly felt anything powerful enough to convince me there was something there. But I remember when the church did a service for Maundy Thursday in the evening. Tables were laid out, and it was a ritual feast, a memory of the Last Supper. I don’t remember all the specifics of what happened, and I’m sure it happened more than once, so my memories are probably confused, but there came a point where the lights were turned off, and we all sat in the dark in the silence. And the Church was stripped of all the devotional pieces, like the cross behind the altar, and any banners and icons, and any other religious things on the altar itself, to be brought back later for Easter.

I don’t know how much this sort of Christian tradition still goes on, or whether it was unusual for us. I know there are still Maundy Thursday services, but I don’t know if they still resemble the ritual feast we did back then. I think it instilled that sense of mourning the death of a god into me in a way nothing else managed to sink in.

I don’t know why I remember that more than I remember any other church services I’ve been to over the years. I don’t really talk about it much, because I haven’t really thought about it very much over the years. But things seem to have collided in such a way that I remembered them again. I think I carry over part of that into my own Mysteries rituals. I have always particularly loved the Nigh Vigil. If I do nothing else, I try to do the vigil, even if it’s just for an hour. Sitting in the dark, with the god, with the ancestors, reading the lamentations, making libations, reading the names, it’s hard. It’s emotionally exhausting. Ultimately, it’s fulfilling. It’s peaceful.

I don’t do a lot of ancestor work. I never have. I have enough trouble talking to gods and hearing their voices. Anything less powerful than that is going to struggle to get my attention. But I have at least tried to pour water, and say prayers, and hope for the best. It’s not something I would ever leave out of my practice entirely, but I don’t think I’ll ever dive very deeply into it, either. The connections just aren’t there. It’s probably the one aspect of my DP work I will probably struggle with, because I’ve been trying ancestor stuff for a long time, but never getting anything much out of it. I pour water, I say prayers, that may just have to be enough.

It’s one of the reasons I waver in whether I will read out all the names of my blood ancestors during the vigil or not. Some years, I do. Others, I don’t. Sometimes it feels like a list of random names of people I never knew, who have no reason to talk to me, and I might as well be reading from the phone book. So I may not do it this year, since I’m just feeling ambivalent about it. I don’t think I’m good with specific ancestor work. But I might pour something specific for my maternal grandparents. They’re the only ones I knew well enough, and loved enough, to care about as ancestors.

In some ways, I feel like I’m doing it wrong, because I don’t have that strong connection to my ancestors, nor is ancestor work the most important part of my practice. I hear others talk about ancestor things, and it seems to work for them, and they seem to get things out of it that I don’t. But perhaps, at the end of the day, it’s just not part of my skill set, and I should stop feeling like I’m deficient somewhere down the line. I still do the rites, even though I have no idea if it’s working. I feel like doing the rites is, in the end, more important than worrying about feedback. I’m getting better at that, at feeling like it’s just not my thing, and not a sign of doing it wrong. But it’s still something I wonder, every now and then.

Anyway. I’m going to keep tinkering with the shrine as the Mysteries approaches. I’ve added all the jackals now, but anything specific for the daily rites will turn up closer to the start of May. I know something’s going to be happening, because it will have been a year since I was initiated as Sobek’s priest, and that’s important. Wesir said the Mysteries would become more significant for me, because of that, as time goes on. So I’m preparing for that as well. It might be the time when I finally do the sacred service rite I’ve been pondering, on and off, for a long time now, and finally consecrate a collar to Sobek and Heru. And probably Isis as well, since I am priest for all three now. But I’ll leave that open and see whether it feels like the thing to do. We’ll see. I’ve got time to plan, so I’m in no immediate hurry to decide anything at this point. But I’m looking forward to the Mysteries, and to Easter, and the long weekend. Bring it on. I’m ready.