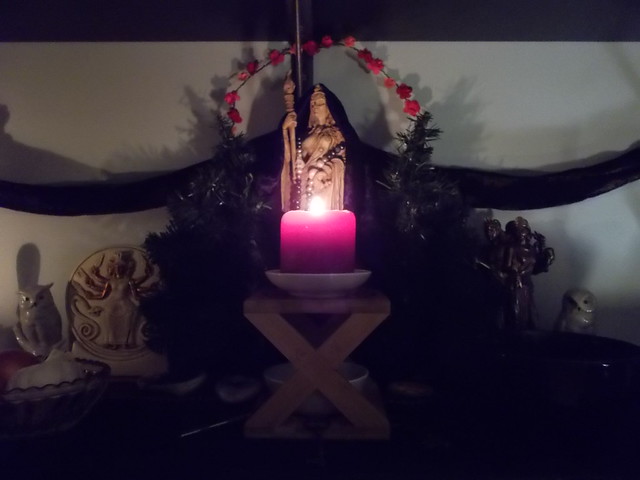 Deipnon is done for another month. I did the asperging Thursday morning while dad was out, so I could do the whole house without being interrupted. I paid particular attention to the doors this time. The herb mix I use in my khernips that I use for deipnon asperging comprises of pre-made purification and releasing herb mixes, along with rosemary, sage, and salt, along with a lit match that is dropped in at the last minute. It seems to work pretty well.

Hekate’s supper comprised of an egg, garlic, onion, sesame seeds, and barley. I would show you a picture of it, but I have failed at lighting up that shrine sufficiently, so all but this photo look terrible. I left the supper in the compost bin after the ritual, along with the pomegranate and cranberry tea libation I ade earlier.

I did a bit of meditation, pondering Her knife. I’ve been thinking of a specific ritual knife for Her for a while now, but never settled on one I liked. I went delving for a knife, to see if I would be given any clues as to what it might look like. What I heard was Hekate describing Herself as ‘She who cuts away’. She has used Her knife on me before to cut away things that are no longer needed. This is what Her knife makes me think of. Trying to find a knife that fits that sense of things may take a while, but it’ll turn up.

Other than that, it was a good, quiet ritual. I’ve had a bit of a busy few days, so it’s nice to sit down to quiet ritual at the end of it all. I’ve just finished my noumenia ritual as well, and I’ll be writing something short up about that in a bit. I’m tired, and behind on a lot of things, but we’ll get there. Have a blessed new moon.