So it’s that time of year again, and I’m doing my usual State of the Shrines update for this year. I posted a little short room tour to my youtube above, if you want to see how my room’s looking now and where all the shrines are in relation to each other. My window is on the east side of the house.

I really have a very simple set-up this year. I only have two active shrines: my Kemetic altar, and my Hellenic altar. I have a few more passive shrines, though, to Mary, Quan Yin, and Bast. So it’s very pared down right now, but I honestly am appreciating that a lot because I’m tired of having six different things going on. Now, I can focus on my Kemetic stuff, and do my Hellenic work for the full and dark moons, and keep that more household stuff going at the same time.

So, without further preamble, here are my current shrines in all their glory.

The Shedety Shrine to Sobek + my Beloveds

So this is my current Kemetic shrine. It’s set up for Temple-style morning rites, though bc my Sobek statue is so big, it’s hard to find a cabinet for Him, so I am just using a crate I bought from Ikea a long time ago, and a scarf to use to cover the opening. It’s not perfect. It’s definitely not ritually pure. But it works for me, and for Him. The reason I switched my main shrine over to here was because I have been trying to find a good place to put my Sau-specific things where I could hide them away from view, and I decided the old wall shrine on the north was the best place for that. So that’s where all my Sau stuff is, so I can go back to using this altar table for its original intended use.

Also just outside you can see on the fence a lot of paper cranes. That’s bc I made a thousand paper cranes last year. (linked pic is of when they were first hung last June.) Took me three months. But it’s done. And now they’re hanging out there to slowly disintegrate. So now I never need to do that again. XD The reasons why I made a thousand paper cranes is a whole ‘nuther story that doesn’t really belong on this blog, so. But I did it. Anyway. Moving on. XD

I do like my simple, stripped down shrines, so this is the epitome of keeping things very simple for me. I’ve got my two jackals guarding the naos (the one on the right is Wepwawet), and inside, it’s just Sobek, my scribe figure, Ma’at, and two LED candles. I don’t know if I’ll decorate this as a proper naos though, or just leave it like this in case I ever need to take it down and use it as a box again. But I guess we’ll see.

Offering table sits in the front with the stuff I use for my morning rite. The green bowl is used for pouring libations into the white dish, though I do want to get a slightly deeper bowl at some point, because it’s only just capable of working without spilling water everywhere. Then it’s just a candle and some incense.

My Sobek Devotional sits on the right, because I always like having it on His shrine. I feel like it belongs to Him, so that’s where it stays. On the left, there’s my Ancient Egyptian Daybook Planner, and a dice to mark the current day. Underneath that is the little ritual book I’m currently using.

Here’s Heru-sa-Aset and Aset, my first and second Beloveds. The covered object at Aset’s feet is a representative of a netjeri I work with. There’s also my knife, an orange calcite piece, my frankincense oil, and you can see my ritual book as well. 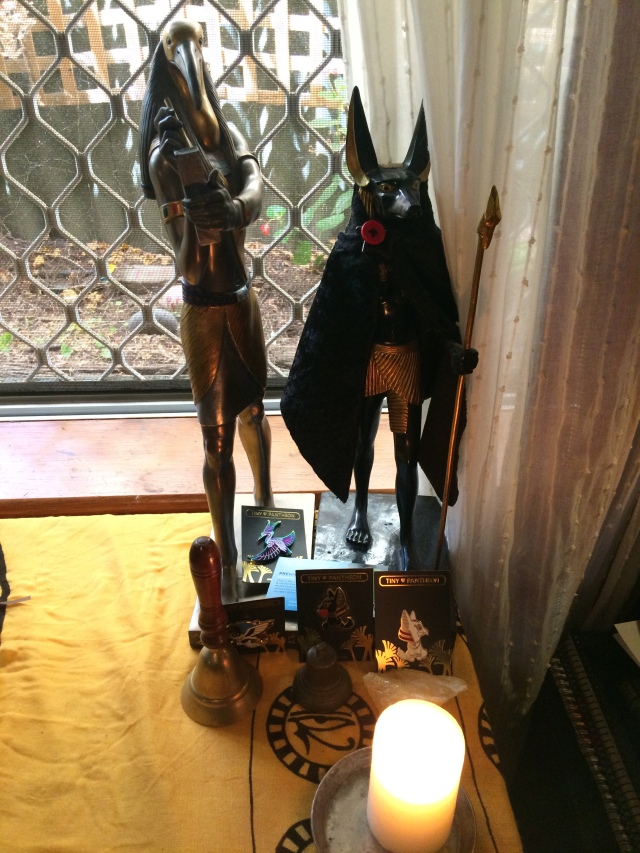 Djehuty and Wepwawet, third and fourth Beloveds. They keep my rital bells, there’s anothe orange calcite piece, and you can see my tiny pintheon badges for Djehuty, and Wepwawet and Yinepu, so I can have Them both represented. The Bennu pin is also there too.

It is tiny but mighty. 🙂 This sits by my bedroom door. It is small, but small means I have to be very picky about what I put up there, and so it reduces the chances of clutter building up, otherwise I wouldn’t have anywhere to work. I do full and dark moon rituals here, and intend to upload little videos of each moon’s altar to my youtube channel, just to see how it changes over time. Feel free to subscribe if you like that sort of thing. 🙂

Currently dark moons are for Hekate, as always, and full moons are for Aphrodite. I’ll post the rituals I use for those too, along with my Kemetic daily rites, in case you’re looking for that kind of thing.

The thing on the back of the wall under the yellow altar cloth is a mirror. I felt like I shouldn’t have an uncovered mirror as part of an active shrine, so it stays covered for the time being. It might be used later on for scrying work, which is why I don’t just take it down. It’s useful there, but needs protection.

I’m actually really happy with this set-up too, because this was what I originally indended for this space when I first put it together, but for whatever reason, it never really came together until now.

These are the two shelves above the shrine, and contain things I use for ritual but are being stored instead. So the top shelf has Hekate stuff, and the bottom shelf is more herbs and incense and a little card that shows me the moon phases, which I got from Etsy. I’ve decided to treat the quarter moons like the equinoxes, and that’s when I’ll switch my candles over, so it’ll change from white for the waxing to waning quarter, and dark the other half of the cycle. I def need more dark moon stuff though, but that’s not an urgent need at the moment. 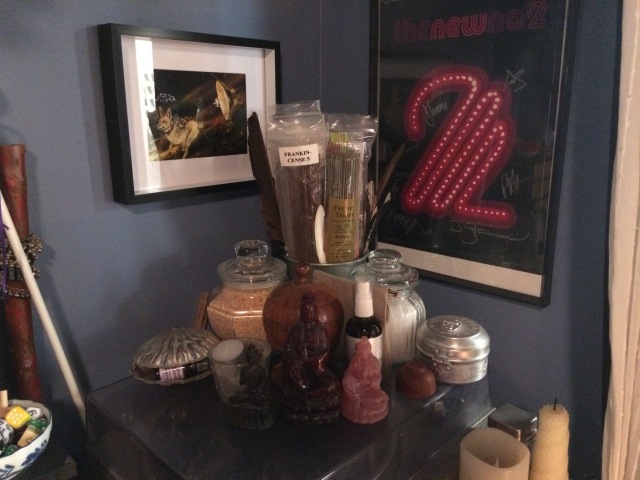 This has been appropriated for my incense and offering supplies for ritual, so they’re within easy reach. You can see the white spiral beeswax candle I use for my full moon rites in the bottom right, and there are two big jars of garlic and salt for my deipnon work. The round wooden box contains my pendulums. Also more Quan Yin statues. XD I don’t even have a proper shrine for Her at the moment, but I can’t bear to put all Her statues away. I just like the way Her energy feels in my room, so She stays. 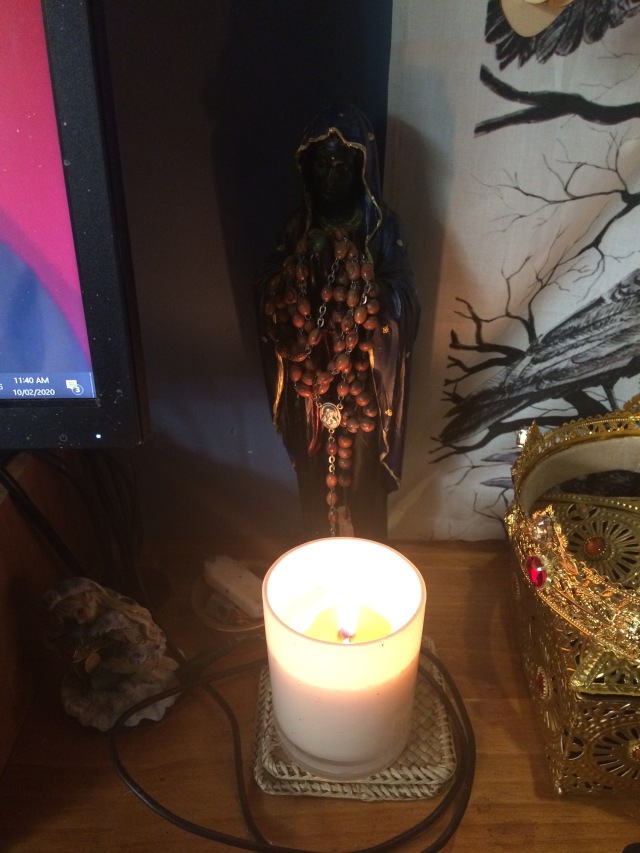 This is Mary’s little space beside my computer. She moved here perhaps two years ago, and that’s where She’s stayed ever since. The candle was a gift from my bff. I don’t do any active work with Her at the moment, but I like having Her there nonetheless. 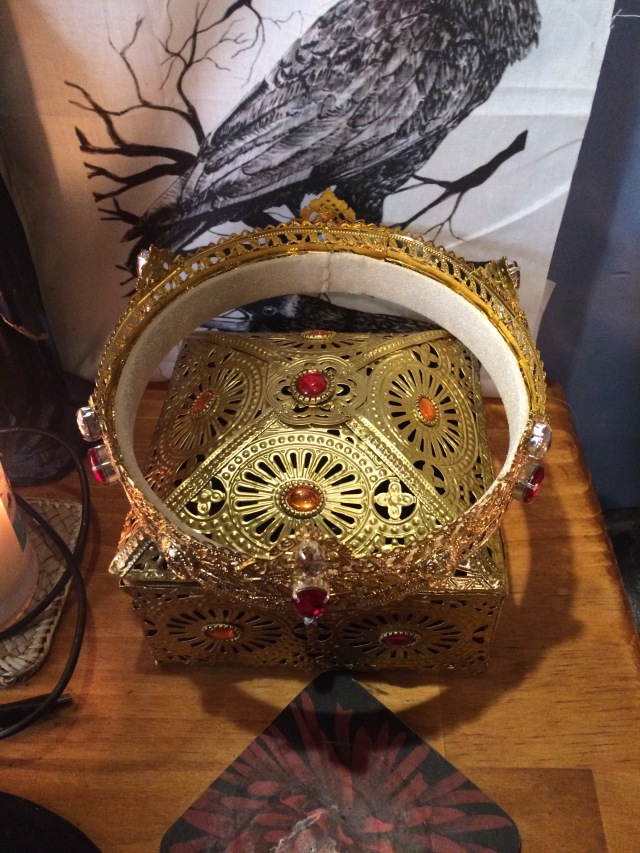 This isn’t really a shrine, but these two things belong to Aphrodite, so that’s why they’re there. I’m not going to reveal what’s in the box though, that’s private stuff, but it’s all Hers.

I’m not doing active Quan Yin practice at the moment, but I still like having Her in my room somewhere, so these three sit at the base of my computer monitor, making sure She’s always within my sight. I find it helps me remember the things She’s taught me, and to be more conscious of being kind and compassionate, which is important to remember to do when you’re online.

This is my little Bast corner, where She can overlook the bedroom door and keep bad things out. Again, have another Quan Yin statue. XD

Anyway. That’s my current lot of shrines for the moment. This is a shorter post than in previous years, but I’m fine with that, because everything finally feels settled. Like this is how things are going to be for a while now, so there might not be a lot of change, but who knows? So I’ll leave this here for now, and work on some other posts.