It’s been a strange week. I’m only just beginning to feel the energies from last week’s ancestral rites receding. It hasn’t been a week of turmoil or chaos; it’s been fairly normal as far as mundane things go.  But I haven’t packed up my TDoR ritual yet. The ashes still sit in the incense burner. Slowly, the water evaporates away. Everything sits still, in silence. All I hear are my own daily prayers.

END_OF_DOCUMENT_TOKEN_TO_BE_REPLACED

Altar after five days of elevation. Today’s rite hasn’t been done yet.

I haven’t done today’s prayers yet, but I’ll do them later tonight when, hopefully, the epic. pain. from my uterus will cease enough for me to get through it without feeling like my guts are being stabbed. (The joys of menstruation. -_-) The rite itself has been, well, it’s been going. It’s certainly not ‘fun’ by any stretch of the imagination. It’s pour the water, read the prayers, raise the altar, pray for the dead, even if you’re tired, even if you don’t feel like it, like I did last night. I’ve had no real contact from the ancestors themselves, but I didn’t expect it, since I’m pretty headblind to them like I am with the gods. I can only assume the state of calm that comes over me when I do the rite is a good sign, and keep going. Do the work. Raise the ancestors. That’s the whole point of it. It’s never been about me, anyway.

I’m also postponing today’s rite because I realised last night that I’m going to have to rethink how I’m doing this so I can keep lifting the altar without potentially setting everything alight if I raise it too high. I think the simplest solution might be to just shift the central candle off the main altar and either to the centre or to the side, so I can keep lifting the altar with books without worrying about fire hazards, since the elevation is the most important part of the rite. I might put the snake representing Antinous there instead, so all the god images are together in the middle, and the candle can be off to the left side. Hmm. That might be the best option so I can keep things relatively safe, and still keep raising the altar. The joys of altars in confined spaces, kids! 😀

I also have this solidified idea for a Lamentations of Nit and Set for the Transgendered Dead that I am going to have to write at some point because otherwise I will be Nagged To Death by the gods about it, so. I might aim to have it ready for the last day of the rite, so I have some time to write and edit it and whatnot, so it’s not a rush job. Look for it on/after the 22nd, which will be the ninth day of the trans* rite for me.

Also, to come, long rambly post about gender and Sobek and Hekate and other rambly nonsense, unless, by the time I’ve written it, it feels more suited to my Dreamwidth journal, in which case, it’ll be over there (though probably access-locked, so if you have an account there and want to read it, lemme know). But if this rite, and the past two weeks have done anything, it’s given me many Thinky Thoughts about gender, and transitioning, and the gods (there is a connection here, I promise), and I am going to need to tl;dr it all over the internet at some point, whether it’s here or there, so. That’s a Thing. 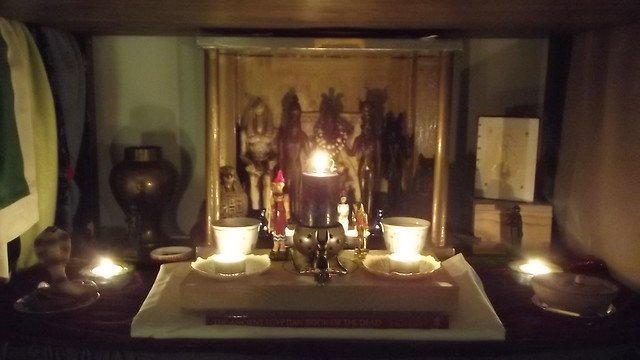 Ancestor shrine set up for the Trans* Rite of Ancestor Elevation. This is after the ritual tonight. Antinous is represented by the snake – there are also some pennies for the dead resting around the snake’s body; Seshat is represented by the book on the right at the back, where I’m recording all the names of the TDoR dead, or at least, as many as I can fit there. The shrine is sitting on top of my copy of the Book of the Dead. There are two cups with water, and the necklace Anubis is cradling is a trans* pride necklace with an ankh on it, which I found last week and decided I needed to have. I think the rest is self-explanatory?

Wanted to get this written while it’s still fresh. Just done the first day’s rituals, albeit after midnight, but whatever. I find ancestor rites more powerful at night anyway. I decided to use one of PSVL’s prayers, the one to Antinous offered here, as well as a modified 70 Day prayers, and this one here. I also wrote an opening prayer/invocation, and an offering prayer. Apart from Antinous, I also invited Nit as bigendered Creatrix, Set as God of the Marginalised and Oppressed (His words; He wanted in when I was pondering Who to ask for help in this rite), and Wesir to join us, as well as Seshat, who remembers all the names, even if no one else does.

The ritual came together later than I had expected, because I kept fiddling around with the order of the prayers, and tweaking the wording to make it work. I offered to the trans* dead as a whole, like I do when I do my normal 6th Day festival ancestral rites, because I don’t seem to attract individual ancestors? Or, at least, that doesn’t appear to be part of how I’m going to work with them. So I just address them as a whole, and hope for the best.

I’ve actually never worked with Antinous before, but I just felt like He was the right god for this, along with Nit and Set. I can’t tell if He was there or not, but I think I probably got whacked by godsandancestors or something, because I cried basically the whole way through. There was definitely another presence there, even if I couldn’t tell who it was. I had an urge to rewrite the Lamentations of Aset and Nebthet for them to offer tomorrow, because obviously what this ritual needs is me crying as I try to read the words I’m meant to be saying while my glasses get all dirty from my tears.

I have a feeling that’s a weird connection that won’t make much sense to anyone else, but IDK, it’s Wesir’s death, and my UPG of Wesir as a trans* god, and bringing His body back together, to make Him whole, and strong, again. Heru avenging Him. Welcoming Him back in peace. The dead being referred to as Wesir. All that stuff. It gets all tangled up in my head, and I’m almost crying again, just thinking about it.

Anyway, it’s after 1am now, and bed is calling. Will check in with you later, internet. For now, my heart is heavy, but I feel glad I did it. May our trans* ancestors rest in peace. May Seshat remember their names for millions of years.

So I’ll be starting this tonight, which will, admittedly, be later than most people who are almost a few days into it, but Australian Time Zones, man. I’m 12 hours ahead of US Eastern time, so I didn’t see the final prayer til yesterday morning (the 13th). I felt it would be better to take a bit of time to decide on what prayers to use and how to structure them within the ritual itself, and pick out the books I wanted to use to elevate the shrine (cos that just feels important, y’know?), rather than rush it and potentially screw it up. For this kind of important ritual, I really need a day at least to prepare, and for one that lasts nine days, well, I’d rather get the prayers right first time round, than feel like it’s not working three days in. I won’t finish in time for TDoR, but I will finish in time for our city’s Pride March, so. But, y’know, better late than never.

I’ll do an altar post with the prayers I’m using later, once I get the first day done, just so you can see how I’ve rearranged my ancestor shrine for the rite. I’m not doing it on the floor, because I can’t actually sit on the floor for rituals because hypermobile joints hooray! So it’ll be the ancestor shrine on a shelf instead. Since I shifted all the books from behind the main ancestor shrine to the top shelf above the Artemis/Isis/Hekate shrine shelf, I had a bit more room to work with, and it’s given me some ideas for how to use the space once the rituals are over. Which also reminds me that I have changed things around a bit, and I ought to do a proper shrine update post, because yes. Midnight urges to rearrange shrines are a Thing I get, apparently.

Also, in case anyone was wondering where all my Coronation hymns went, well, I was hit with a migraine two days in, and it knocked me out for three days, and so I only have scraps of things written. What I will do, though, to make up for it, is get them written in my own time, and once I rearrange the calendar/Wheel section better, I’ll include them all there for anyone else who wants them.