It’s been a strange week. I’m only just beginning to feel the energies from last week’s ancestral rites receding. It hasn’t been a week of turmoil or chaos; it’s been fairly normal as far as mundane things go.  But I haven’t packed up my TDoR ritual yet. The ashes still sit in the incense burner. Slowly, the water evaporates away. Everything sits still, in silence. All I hear are my own daily prayers.

END_OF_DOCUMENT_TOKEN_TO_BE_REPLACED 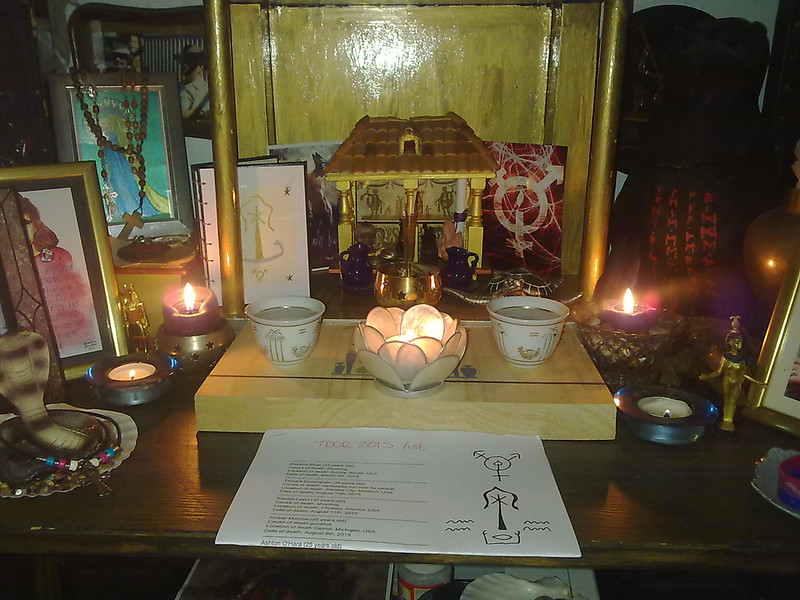 Water, that they may be cooled.

Incense, that they may be bathed in the scent of the gods.

Flame, that the way may be lit for them.

May the gods and honoured ancestors lift them up,
May Seshat record their names.
May they rise to the heavens in peace.

I may still do something small for the Trans Day of Remembrance, but it’ll probably be fairly simple. Offering water, lighting incense, reciting the names, etc. But I won’t continue with the elevation rite.

I’d been contemplating it all day, and I had a niggling sense that I should probably stop. General purity issues aside, I just wasn’t sure it was worth continuing this particular ritual, for this particular set of ancestors, while I was menstruating. It felt potentially triggering to those spirits I was trying to help; whether this would be the case, I don’t know, but better safe than sorry.

I’ve moved the shrine to my ancestor shrine. I’ll do any TDOR stuff there. I’ll also check beforehand if they want me to do anything, just to be on the safe side. We’ll try again next year and see if my body behaves.

Menstruation is a bitch. Turned up during the middle of the day. Because of course it did. Good thing I was prepared.

I’ve already closed up Sobek and Heru’s shrine for tonight. I won’t do my daily devotions tomorrow. It’s not a big deal. This is just one of those protocols we’ve developed. I don’t go to shrine on the first day of my period; it’s a self-care thing. After that, I don’t touch any statuary until I’m done bleeding. So no washing Heru’s statue. But it’s alright. It’s a way to manage it that means I can minimise the time I’m away from shrine and not break my daily devotion habits.

As for tonight, I consulted the runes to see if I should do tonight’s elevation rite. I use the Saxon runes, because Woden idk.

I first asked if I should do tonight’s ritual, and I drew Thorn. Definitely a ‘well, you could, I guess, but I’m not sure that’s such a great idea’ vibe. So that’s a no, then.

Then I asked if I should complete the nine days anyway, and I drew Rad. Bring it home, you can’t stop now. So that’s a yes, then.

I’ll check tomorrow to see if I should proceed or not or if they want me to wait another day. One way or another, all nine days will be completed. They just won’t be consecutive days. But that’s alright. It just means more writing time for me tonight. 😀

Day 1 shrine, taken at the end of the rite.

First two days done. Nothing spectacular to report. Not overwhelmed. Not drowning. Just tired. But then it is Friday, and I am ready for my weekend, ngl. Also, I am being a bit more cautious in regards to cleansing and covering the shrine, so that might also be limiting it somewhat.

I’m using my desk for the shrine, because space, and not setting things on fire. I’m also packing it up a bit afterwards, so I can pull my curtains across without breaking things.

Pulling two cards from my WildWood tarot towards the end of the ritual. I’m asking some vague form of ‘are there any messages you wish for me to know?’ and seeing what comes up. Yesterday, it was the Knight of Arrows, and the Wanderer. Tonight, it was The Guardian … and the Wanderer. (I am taking a Hint. I don’t know what I’m taking it OF, but repeated cards, ey? That’s a thing.)

I’m doing most of my post-ritual babbling over on tumblr, because it seems easier than fiddling around here, and I want somewhere to record stuff for every night. I may copypaste it back here afterwards, or archive it here somehow, but we’ll see. Mostly I want to record the books I use each time, and the cards I draw, and anything else I find relevant that I want to get down immediately post-ritual.

Anyway. Tired. Need to write. It’s too godsdamn hot. *grumbles about the weather* 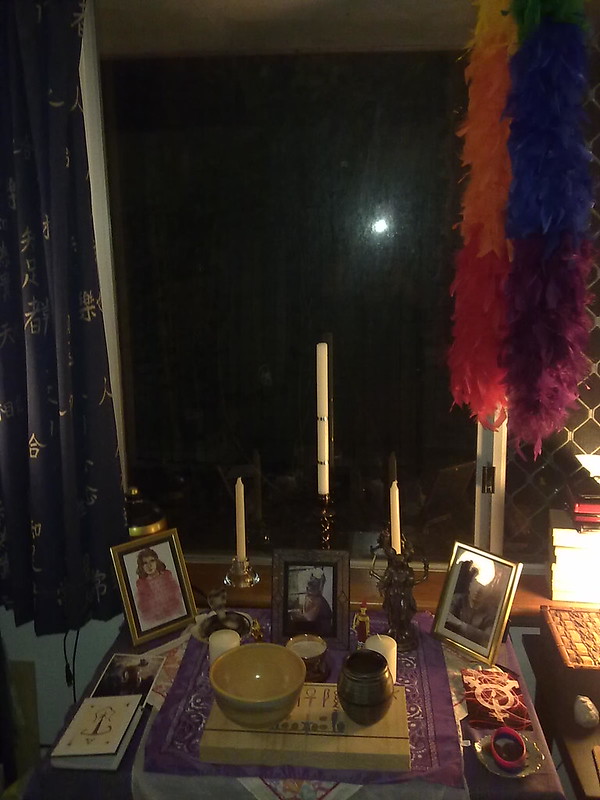 I’ve spent the last two days putting the shrine together. It’s sitting on my desk this year, rather than my ancestor shrine, because I am not keen on setting things on fire so. Not having use of my desk for nine days is hardly suffering in the grand scheme of things, and I have all the laptops anyway, so it’s not a problem. Of course, all the stuff that was on the tables and windowsill has been displaced, and it’s all over the rest of my room. But I like what I’ve done this year.

It’s a bit of an awkward spot, tbh, because of the curtains, so the photos will have to be laid down flat, and some of the other things moved out of the way, so I don’t wreck the shrine with my curtains. But I think I’m happier with this one. I might still tweak it a bit before I begin, but that’s basically it.

I got the bandannas, the brown pot, and the white taper candles at the back, from the op shop I work at. The rest is my own stuff. And I wanted to have my rainbow boa somewhere, so it’s hanging from my curtain rail. I’ve also got a bi pride bracelet thing (on the bottom right), because of course.

Anyway. BRB figuring out my ritual structure for the elevation, so I can start on time this year, rather than a day late. At this stage, the only prayers I’m thinking of using are the Lamentations I posted yesterday, and perhaps PSVL’s Antinous prayer I used last year. I will also try to record every day this year, rather than just two, like I did last year. Anyway. Expect lots of posting or something. IDK.

I think I meant to have this done for last year’s rite, but it somehow never quite got done. So. I finished it. Actually quite a while ago, but apparently I never posted it because why would I do that ahahahaha.

Anyway. Have some Lamentations before the Rite of Elevation begins tomorrow. Use, or not, as you desire. I might do another, longer post about this later, as I have to rush off for work, but I wanted to get this posted now, before I forget, in case anyone wants to use it in their own rites.

END_OF_DOCUMENT_TOKEN_TO_BE_REPLACED

Well, I’ve got my shrine mostly organised. I did some planning at work today on the layout and positioning, and that’s mostly worked out. I’ll post some pics later, once it gets underway. I wanted to get it mostly organised before we’re due to begin on Thursday, because work, and I would not have the spoons to organise the shrine that night as well as put something together. At least now I can concentrate on finalising the liturgy I’ll be using.

Also, I have Made A Tumblr for the rite, since they’re tumblr-based, and I might as well join in there. Whether I use it after that remains to be seen. I have no love nor time for tumblr. And I will probably get around to setting up cross-posting so all my TDoE/TDoR stuff goes there. But if anyone cares, this is me: http://sobekemiti.tumblr.com/

Because I am original or something idk.

Anyway. I am way behind on my NaNoing, so I’m going to try to get even 1k done tonight, just so I don’t feel like I’ve been neglecting it for the past two days.